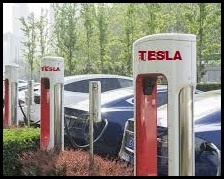 It may sound incredible, but electric cars could soon be an economic driver for oil-rich Alberta. The increase in global sales for EV's has been astonishing. In 2010 there were about 17, 000 electric cars on the road but today it's estimated 7.2 million. Sales in 2019 swelled to 2.4 million. Tesla models accounted for most of the increase. General Motors announced it will go all electric by 2035.

Key Component of EV Batteries is Lithium- Plenty in Alberta

Lithium is a light, soft, silvery-white alkali metal. A key component of the batteries in EV's is lithium, the type found in Alberta, if you know where to look.  "There are a lot of opportunities for lithium in Alberta," said Roy Eccles, a senior consultant with Apex Geo-science in Edmonton.

Like all alkali metals, lithium is highly reactive and flammable, and must be stored in mineral oil. Exploration of the oil and gas reservoirs has shown, that between 1,600 and 3,330 metres below the surface, the accompanying salt-water brine is enriched with lithium. The Leduc Formation, the source of Alberta's first big oil boom, is a rich lithium deposit. There are estimates of 10.6 million tons of lithium carbonate equivalent, in the province.

Oil and Gas Industry - Plus - Tackling Climate Change - A Dream?

It is possible. It is the future. Companies are hoping to capitalize on the growing demand for lithium batteries by finding an easier and greener way to extract the metal. Chris Doornbos, CEO of Calgary-based E3 Metals Corp, looks at Alberta’s vast depleted oil and gas reservoirs and sees only opportunity. His company is testing new technology that, if successful, would extract lithium from the brine in old wells with almost zero emissions.

"It's a big opportunity for the province because producing lithium is very similar to producing oil and gas," said Doornbos, a geologist who previously worked for Suncor Energy Inc. Everything that is oil in Alberta could be re-purposed to the lithium industry. Businesses are looking, not only at the infrastructure, but also looking at the people and their unique expertise and skill sets. Doornbos says, "At the end of the day, it's still putting Albertans back to work — it's nothing we don't know how to do or haven't done before."